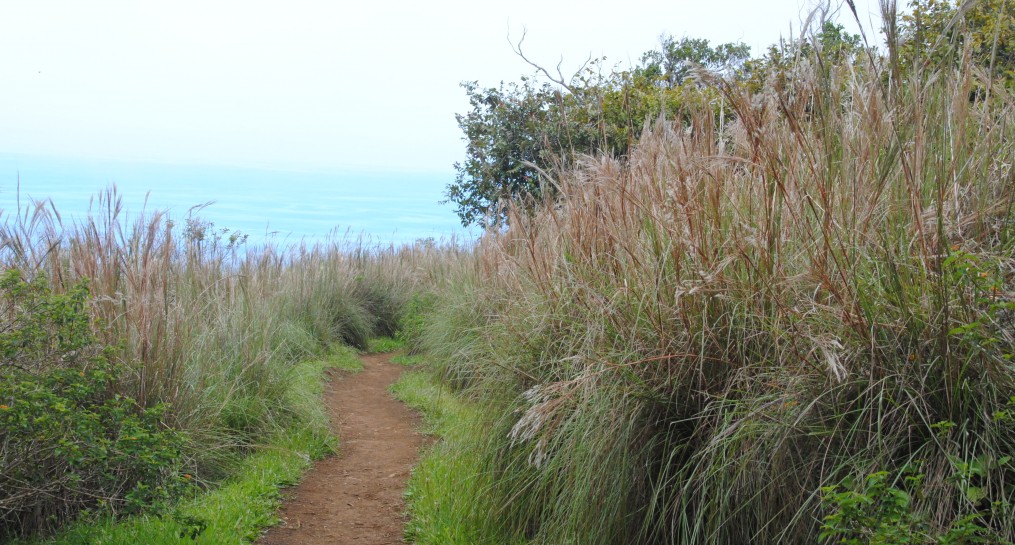 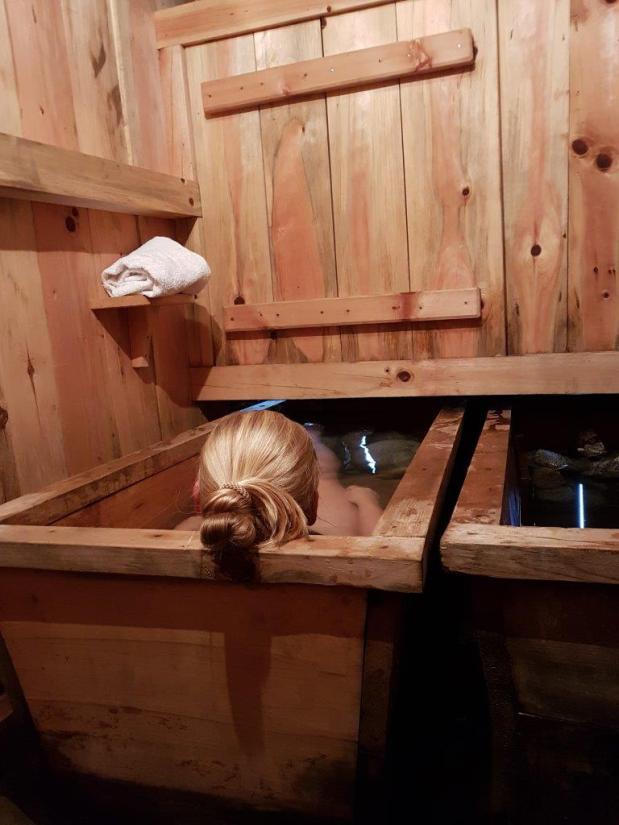 Slipping into the soothing water at the hot stone bath felt like yet another blessing after returning from the hike to the Tiger’s Nest.

On the way back to Paro, we stopped for a hot stone bath. Our guide had called in advanced and booked the time. This is essential, as it takes more than 5 hours to heat the stones on the wooden fire.

The hot stone baths can be found in farmhouses and hotels, and it is tradition to go as a family or a group of friends before special occasions. At this particular hot stone bath, there were several rooms in a wooden shed out in the courtyard. Our room had two wooden tubs, and looked a little bit like open coffins…

Filled with cold water, the burning hot river stones were dropped in at the far end. The water sizzled, and some of the rocks were so hot that they crack when meeting the cold water, and released the minerals inside.

Indulged in the heated water, the muscles instantly felt relaxed. When you feel it is time to get the temperature up, you simply shout out “Aue Dho gobay Dho” or “Dho Dho” which literally means “need some more stone”, or “stone stone”. The strong farmwoman quickly found her fire tongs, opened the chute at the end of the wooden room, and exchanged some of the chilled rocks with smoking hot ones. On the second round, I could clearly feel the strong heat spread from my feet and up.

I am normally too restless to even stand 10 minutes laying still in a bathtub, but I found my peace here and soaked for 45 minutes! I only wish I had known about this amazing tradition earlier, so we could have pampered our bodies several times during our tour. Oh well, just another reason to return…. 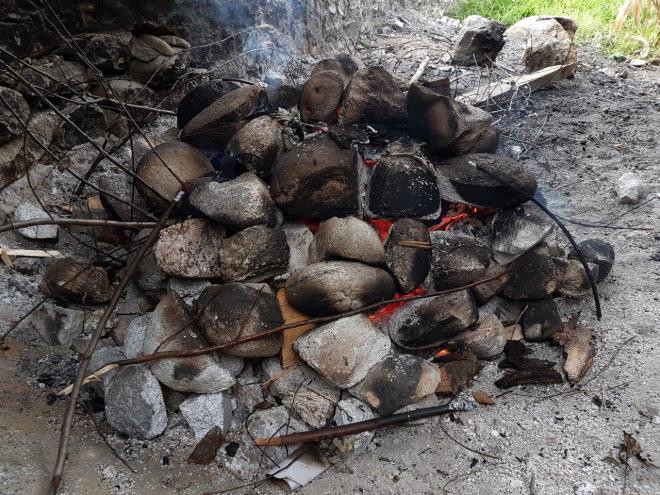 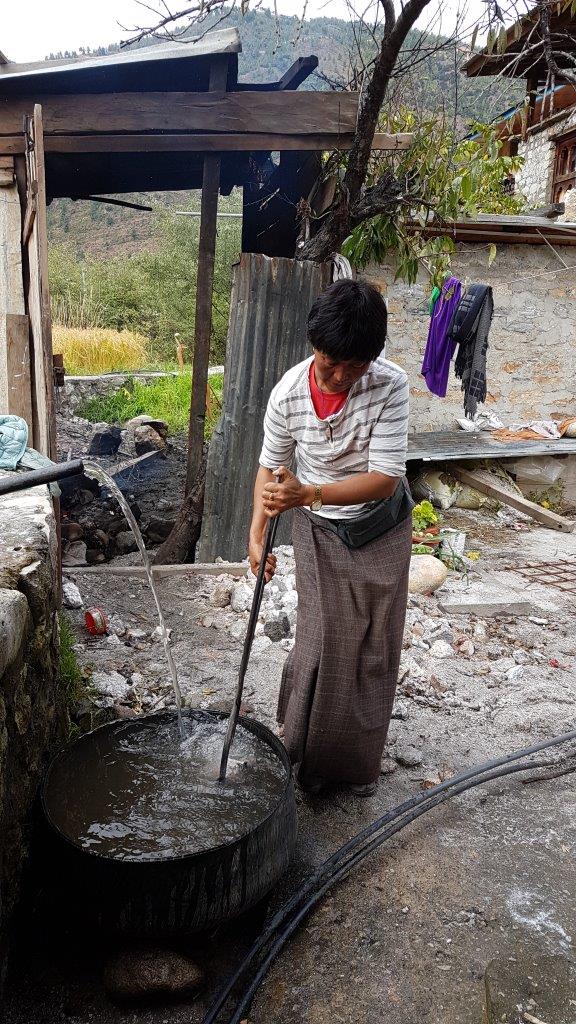 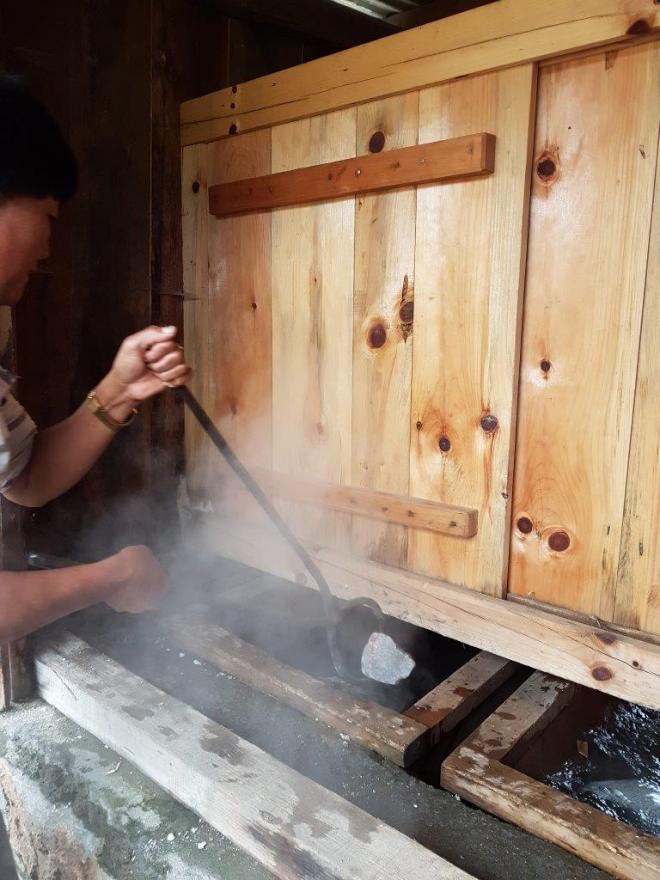 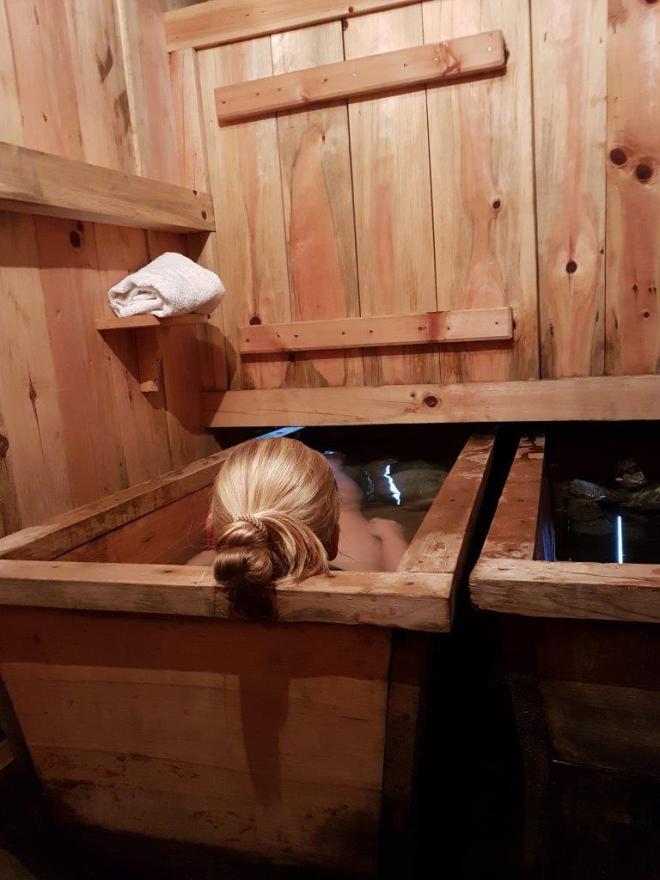 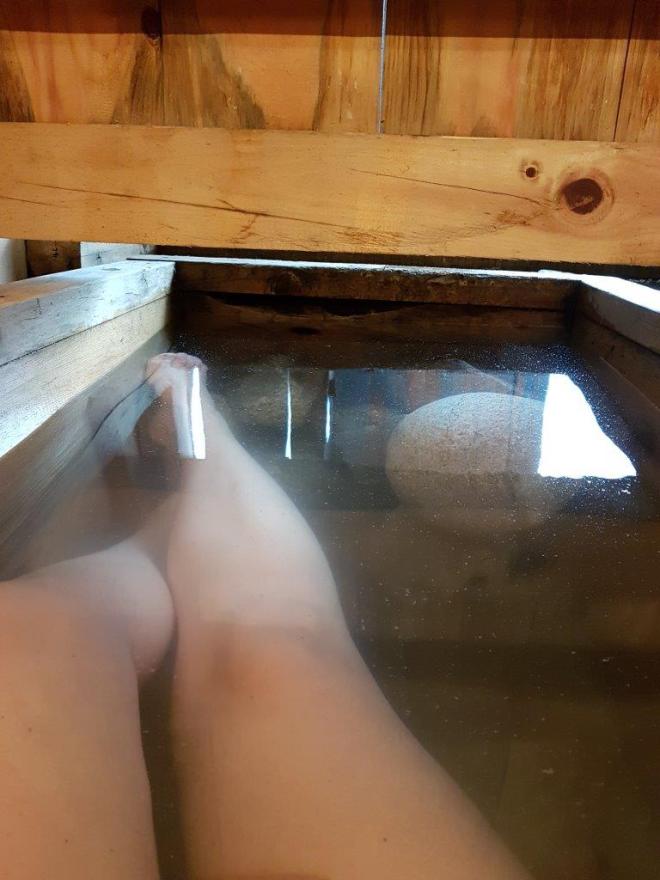 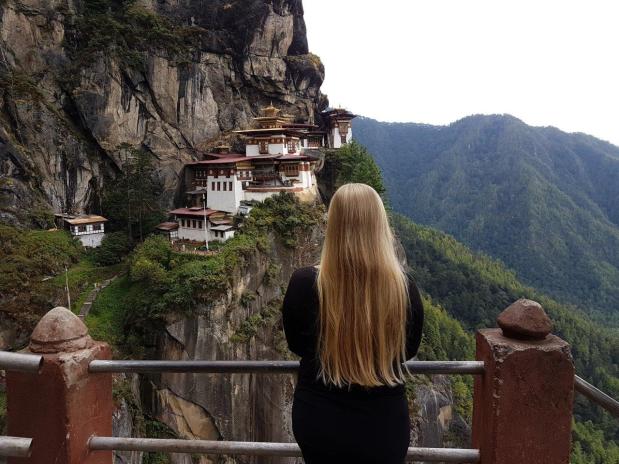 The clouds were hanging low over the valley, and considering the heavy rainfall during the night, I was not quite sure how the hike to Tiger’s Nest would be.

As I have grown up with the saying “there is no such thing as bad weather, only bad clothing”, we dressed accordingly, and brought extra clothes in waterproof bags.

Stepping out of the car at the starting point of the hike to Tiger’s Nest (or Paro Taktsang, as it is officially called), it was quite obvious that this is the main attraction in Bhutan. We were quite overwhelmed by the amount of other tourists. Not that it was that many, as the tourism in Bhutan is limited and it never felt crowded, but it was for sure a lot more than we were used to. Then again, the other days we had only met a few every now and then…

It was still early morning, and the few souvenir sellers that were already there, had not yet finished unpacking their goods. Even the sad-looking horses had not started their tough day carrying lazy tourists to the cafe with the viewpoint. Needless to say, we depended on our own feet…

Passing the three houses with prayer wheels rotated by the running stream, the assent started for real. I could feel the height making it harder to breathe and my feet felt heavier, so we went nice and slow. The rain had luckily stayed away, but the clouds and mist were blocking most of the view. 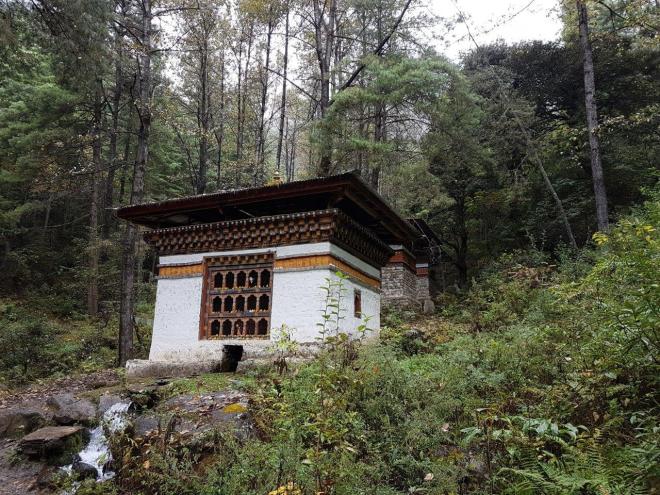 Three houses with prayer wheels rotated by the running stream.

As the cafe about half way up is the only place along the route with a bathroom, we went the short detour there before continuing the last part. The grey wall of clouds was right in front of me, but all of a sudden the wind swept by making a hole in it, letting us sneak a peak of the Tiger’s Nest high up on the steep cliff. 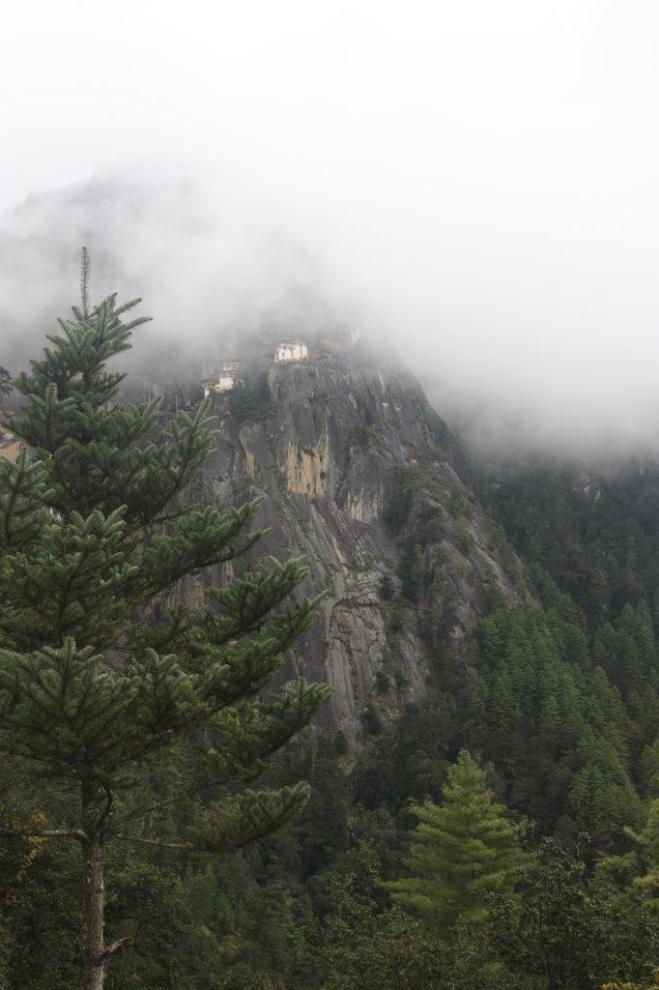 A sneak peak of Tiger’s Nest. 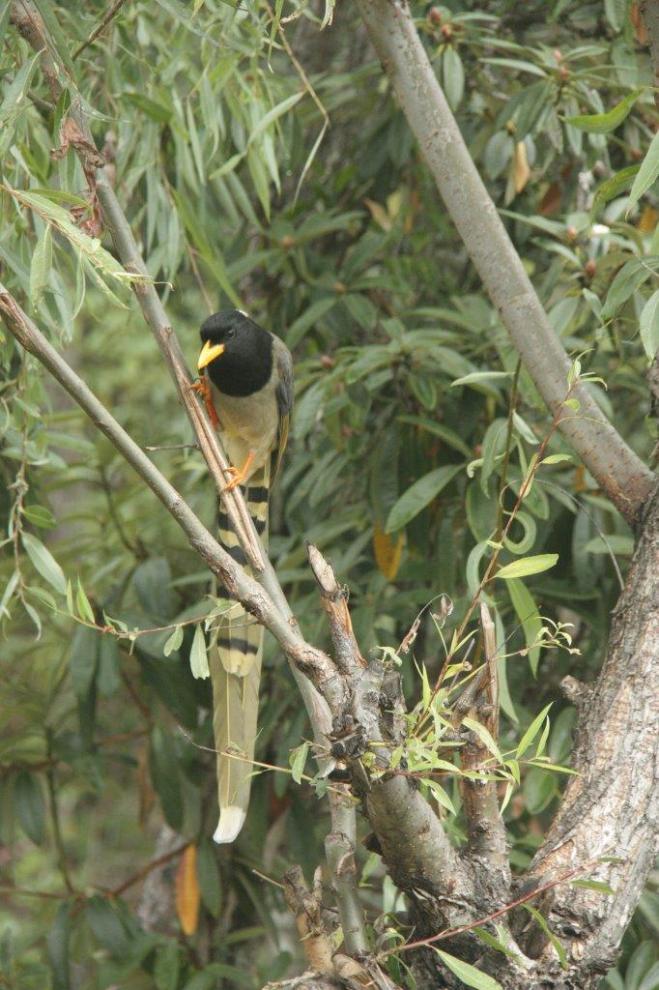 While waiting for the grey clouds to go away, a colorful bird suddenly appeared.

The magical moment was short, and as fast as it appeared, it was concealed by the clouds again. Back on the track again, the peace and quiet was interrupted by some other tourists playing music from the loudspeakers on the phone. They had passed us earlier riding the horses, but luckily, we were faster than them by feet and quickly passed them. Soon we could hear the calming sounds of the breeze in the trees and the billowing prayer flags again. And my pounding heart and short breath… 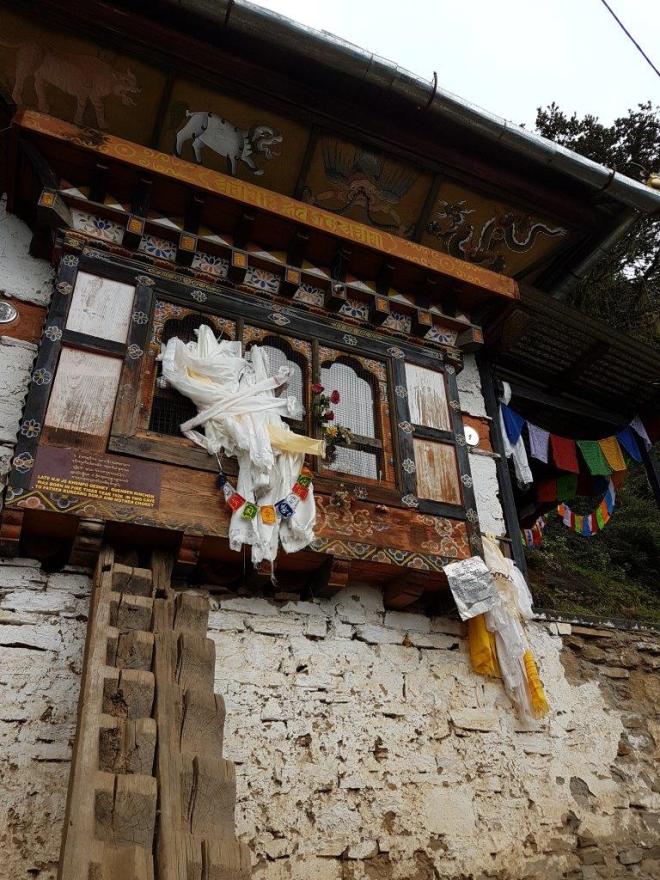 Reaching the highest point right opposite the Tiger’s Nest, the grey wall we had become quite aquatint with was still there. We had a short break and some sips of water, and just as we were about to give up and continue, the grey was yet again swept away. The view was absolutely breathtaking (ok, I might have already been out of breath…) and after standing motionless for a little while, I got my camera out. 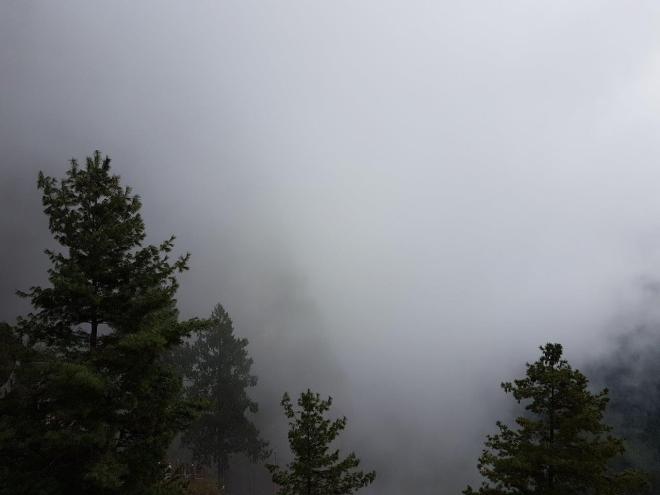 The grey wall of cloud hiding the Tiger’s Nest. 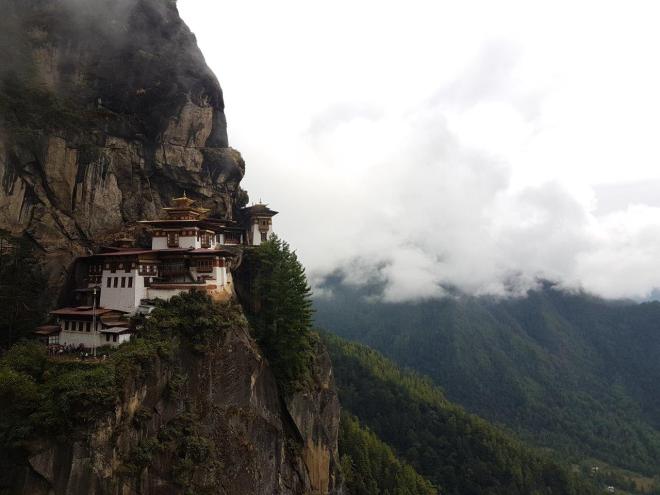 A lot of photos later (I would not risk it to disappear behind the big grey curtain again), we started descending the steep stairs. Going down again?? – you might ask. Yes, we had to go down the gorge to cross the bridge with the waterfall backdrop to get back up at the other side. And mark my words – this is the steepest part of the track, and you have to get back the same way. 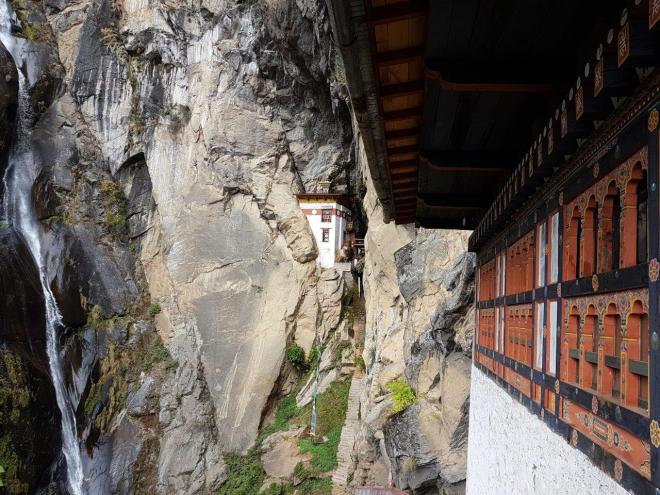 Entering the temple, you have to leave your phones and cameras at the gate, as it is strictly forbidden to take any photos. It also allows you to have full focus of actually being present at this fascinating place, not worrying how to make the best pictures.

Legend has it that Guru Rinpoche, the one that introduced Buddhism to Bhutan, flew from Tibet to the cliff high up in the mountain on the back of a tigeress in the 8th Century. Once he arrived, he sat down in a cave meditating for three years, three months, three weeks, three days and three hours. Many centuries later, in 1692, the first part of the Tiger’s nest was built around this cave. The complex has been built in several stages, including the rebuilding after the devastating fire in 1998, and now consist of nine temples.

Walking around the temple caves, we climbed the rocky stairs and listened to the stories about the temples, statues and the paintings. As this was at the end of our tour in Bhutan, we had learned plenty about the Buddhism from our knowledgeable guide, and could recognize quite a few of the Buddha’s, paintings and other symbols. It kind of felt like a final exam, but in a good way, making many of the pieces of the puzzle of what we had learned along our journey fall into place.

I must admit – I had pictured myself experiencing the Tiger’s Nest in sunshine under the bright blue sky. And I was a bit disappointed that the only grey day we had, was the day of what I thought would be the highlight of the trip. In hindsight, I was actually happy it ended that way. Not only did the clouds protect us from the burning sun, but the clouds also made the scenery look even more dramatic. 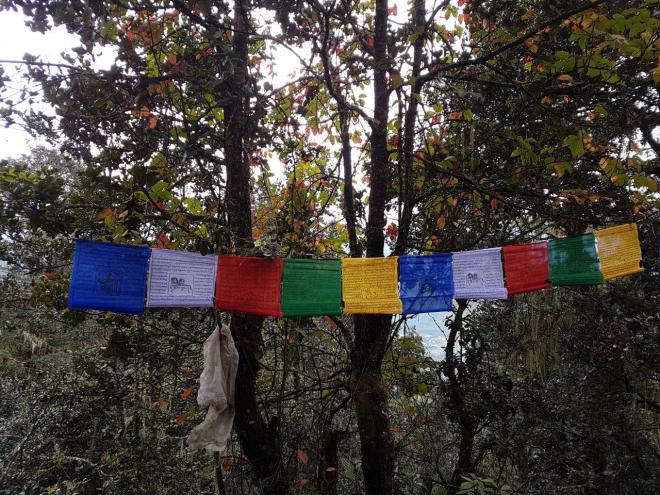 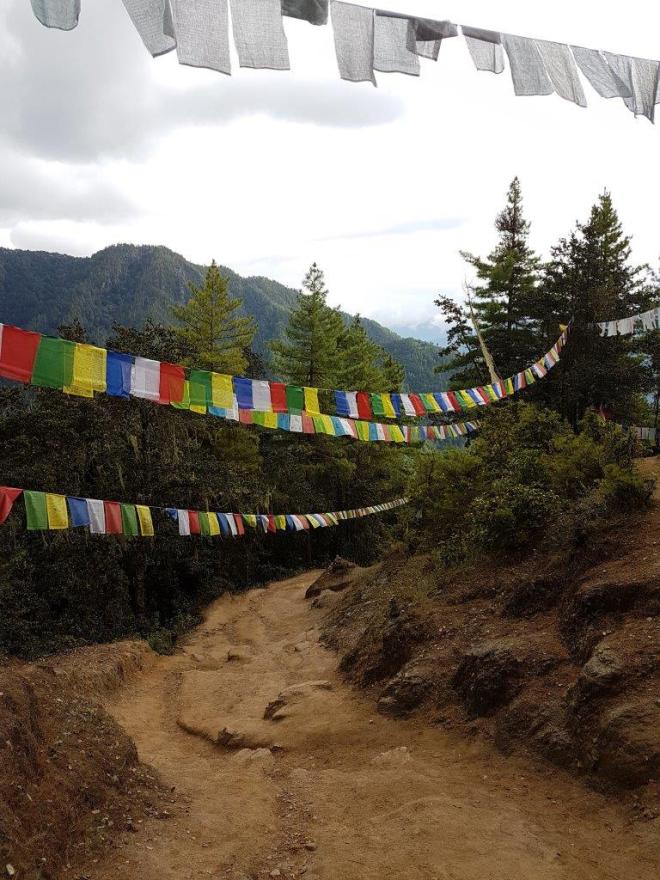 Long rows of prayer flags all along the track to Tiger’s Nest.